To Travel Solo Or Not Travel At All?

Why I plan on doing it alone

You know those times when everyone tells you its a bad idea and yet you do it anyway? This summer I'm taking my first solo trip and I can hardly wait. I'll be spending two weeks in Spain; the first will be mostly taken up by Spanish classes, the second will be spent traveling up the east coast. If I'm lucky I'll get a chance to rock climb and hopefully windsurf while improving my fluency in Spanish. After all, the best way to learn a language is to immerse yourself in it, right? 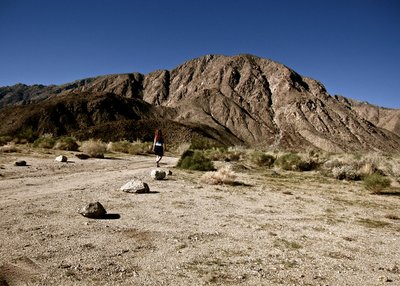 Wandering into the desert by myself

I know, a young woman traveling alone sounds a little bit sketchy. My friends have assured me I will be undoubtably robbed and taken advantage of if I go through with this crazy plan. While I know that sometimes bad things happen I think its important not to let your fears prevent you from living your life. My desire to travel solo goes a long way back. In eighth grade my best friend and I made a fantastic around the world itinerary. For weeks we researched the countries we wanted to travel to, searched up the best time to go, and painstakingly planned our schedule for a trip 5 years in the future. When a few months later she told me it wasn't going to happen I was devastated. After lamenting my lost dreams a came to a conclusion: I would do it alone. Since then I've managed to convince myself that I would rather go alone, and while my RTW trip is still four years away I'm far to antsy to wait until then to travel. Thus in about two months I'll be grabbing my backpack and running headlong towards adventure. The thing about solo traveling is that you can be as selfish as you want. The only person you have to please is yourself; no compromising over where to eat, what to see, and when to take a rest. I also find that you're more open to meeting people when you're alone, which will help me to come out of my shell a bit, and give me more opportunities to practice my Spanish.
I plan on being incredibly careful of course. I am aware of the risks and precautions I should take to avoid any dangerous situations. The thing is that people overestimate how dangerous travel is. My city has just as much, if not more crime than the places I'll be traveling to. I'm prepared to avoid wandering at night, sketchy neighbourhoods, and anything that gives me a bad vibe. I still believe that the world is an essentially good place with only a few exceptions, not the other way around. When the options come down to taking a bit of a chance or staying at home all summer the choice is obvious:Off to Spain I go.