Today was my chance to get a good look around the university, and see if it's somewhere I can see myself living in the future. I was almost happy to wake up to a cloudy sky; mind as well see the place at its most natural! 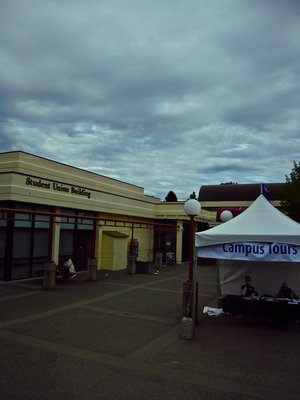 This photo was taken right before it started raining

We grabbed a reasonably good breakfast at the cafeteria, then headed out for a walking tour of the campus. The place was even better in the daylight; the trees were all blossoming and there were numerous walking paths between the buildings. My favourite part was the psychology building. Half way through construction they hired a new architect, so the building is full of dead end hallways, and staircases that lead to nowhere. Apparently the psychology office is deliberately impossible to find! 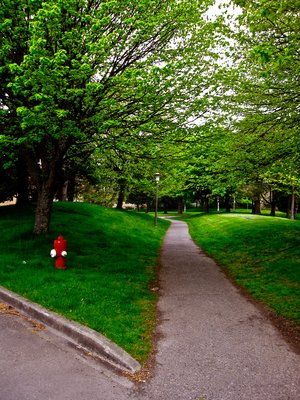 We then took an impressive bus tour of the recreation faculties. The gym is one of the largest in Western Canada, which is pretty easy to believe when you see the rows upon rows of workout machines. It had to be at least three times the size of the gym I attend at home! They also have an outdoor pool open in the fall, and an indoor one for the rest of the year. 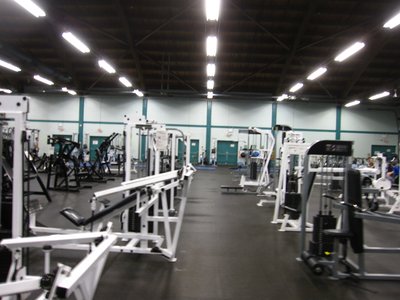 The part I was most excited about however, was the olympic sized skating rink! Hopefully when its not being used for hockey I'll be able to do a bit of short track speed skating (maybe I can even find someone to join me so its not totally lonely).
After sitting through some faculty information and a registration tutorial, we took the bus down to the Inner Harbour Area (It was a double decker!). Tomorrow... I'll have my chance to explore. 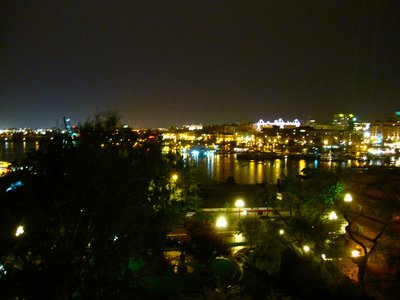 View from our hotel at night